It all started from the idea to make the internet accessible to billions. Ten years later, YOYO continues to empower people and being an entrepreneur incobator, creating opportunities for them to earn through mobile technology.

Many things have changed within 10 years, but one thing remains the same: YOYO’s commitment to its people first approach and putting our people and their contributions at the forefront.

With that said, our celebration this year is not just a party with some nice foods or fun games. This year, we celebrate the most important element of YOYO: our people, YOYO family members.

Hence #TenYearsWithYO, as “YO” indicates YOYO and also a short form of “You”.

Lights, camera, action! Before the event started, members were having lots of fun at the photobooth.

At 17:00, the event officially started as our MC made an opening remark. Icha (ID) and Reese (PH) were the master of ceremony of the night.

In Jakarta, we have the honor of having Mr. Yorihiko Kato, the director of YOYO and angel investor to be with us to celebrate the important night.

While in the Manila, we have Suni who traveled the miles from Malaysia to the Philippines to attend our event.

Through the “YOYO in Ten Years” video, Icha and Reese took us to 10 years ago when YOYO was born and remind us of our history – those countless challenges where work days turned into long nights, ideas that need to pivot and executions that challenged creativity and capabilities – and yet YOYO stands tall and still as a team.

After that emotional video was played, Kyon was welcomed on stage to deliver his speech.

“YOYO is a family, YOYO is a home. Together, we can solve every problem.  So let’s enjoy our journey, start a great party and let’s go to the moon together”

Kyon, Founder and CEO of YOYO.

The event was also enlivened by members who share their YOYO journeys. The first group is the working parents of YOYO: Feby, Aria, Shienny, Suni and Maureen who shared how YOYO helps them to pursue work-life integrations.

The next group is members who celebrated their first year work anniversary this year: Ardi, Tonie, Daniel and Eunice. They shared what they love about working in YOYO 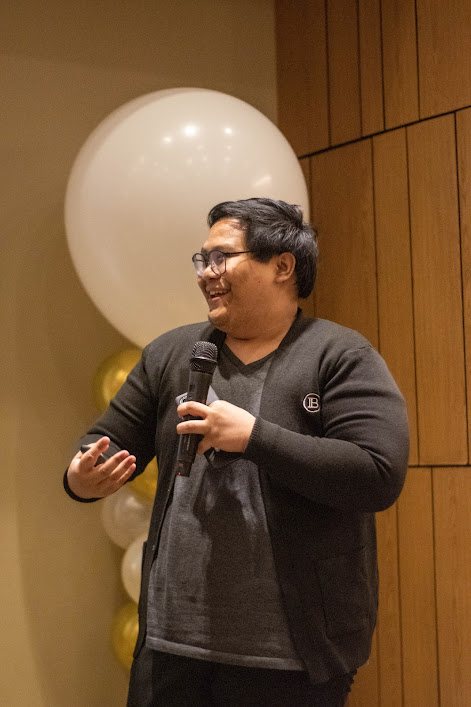 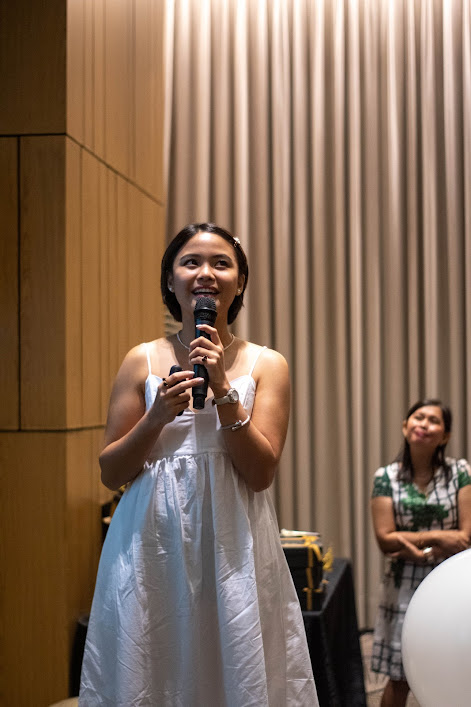 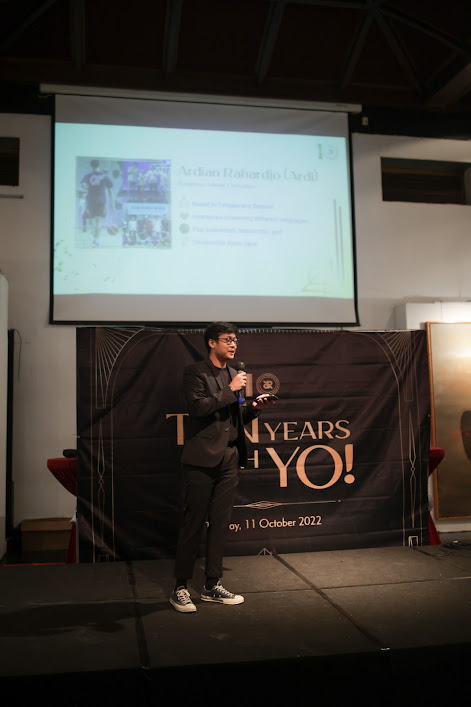 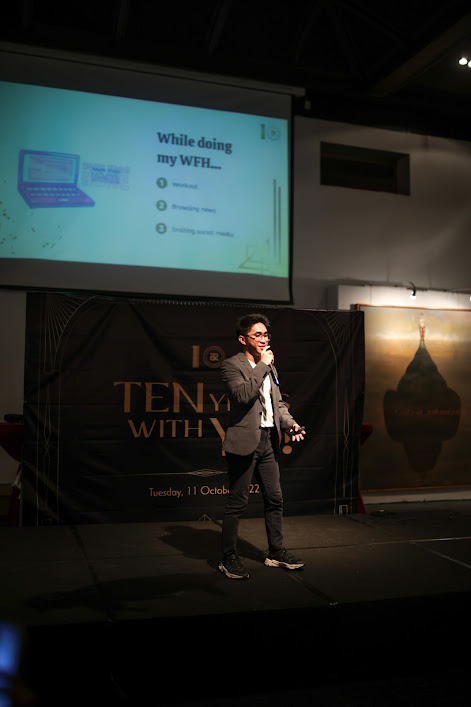 The last group of members are Seto, Ajeng, Nina and Hazel, who shared how YOYO has made an impact  in their life after working since they have been working with YOYO for more than 4 years. 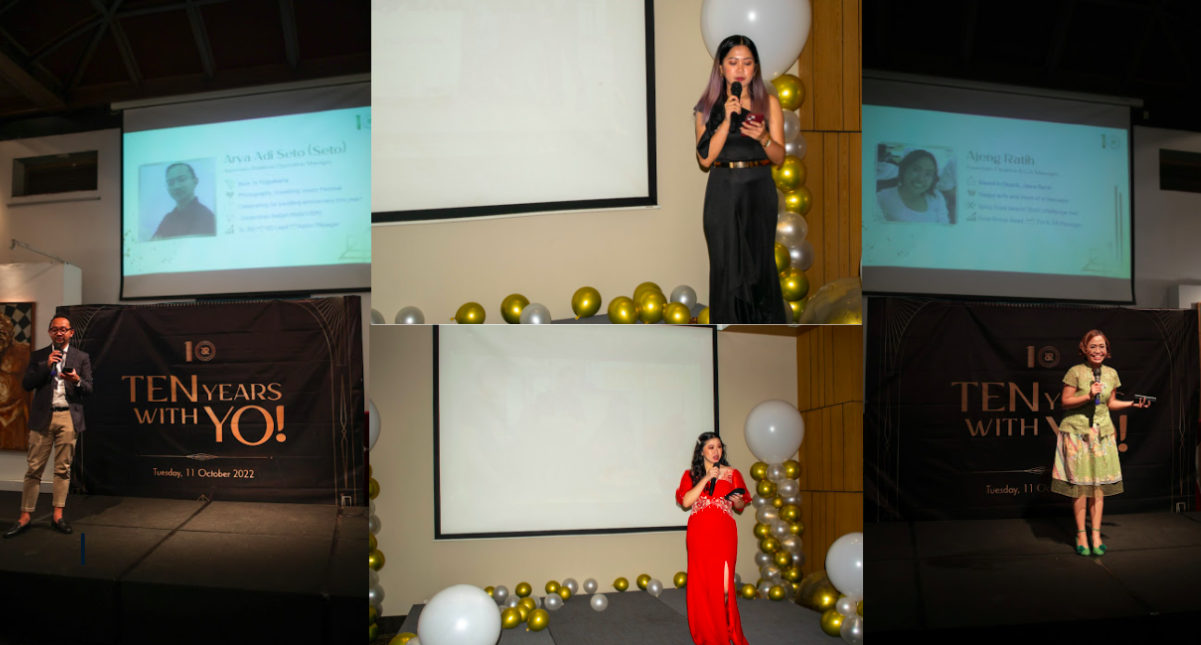 To recognize and appreciate their loyalty especially their commitment to stay during the stormy days of the pandemic in 2019, Icha and Reese welcome all the members on stage to have the honor of doing the anniversary toast with Kyon and Mr. Kato (in Jakarta) and received a flower bouquet as a token of appreciation. 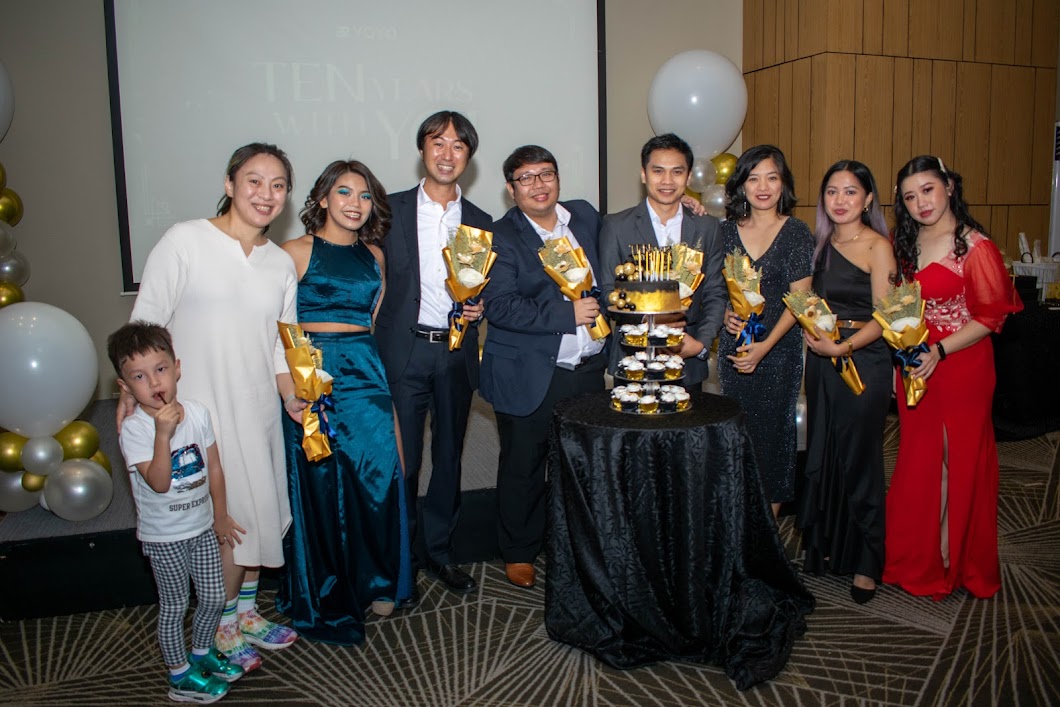 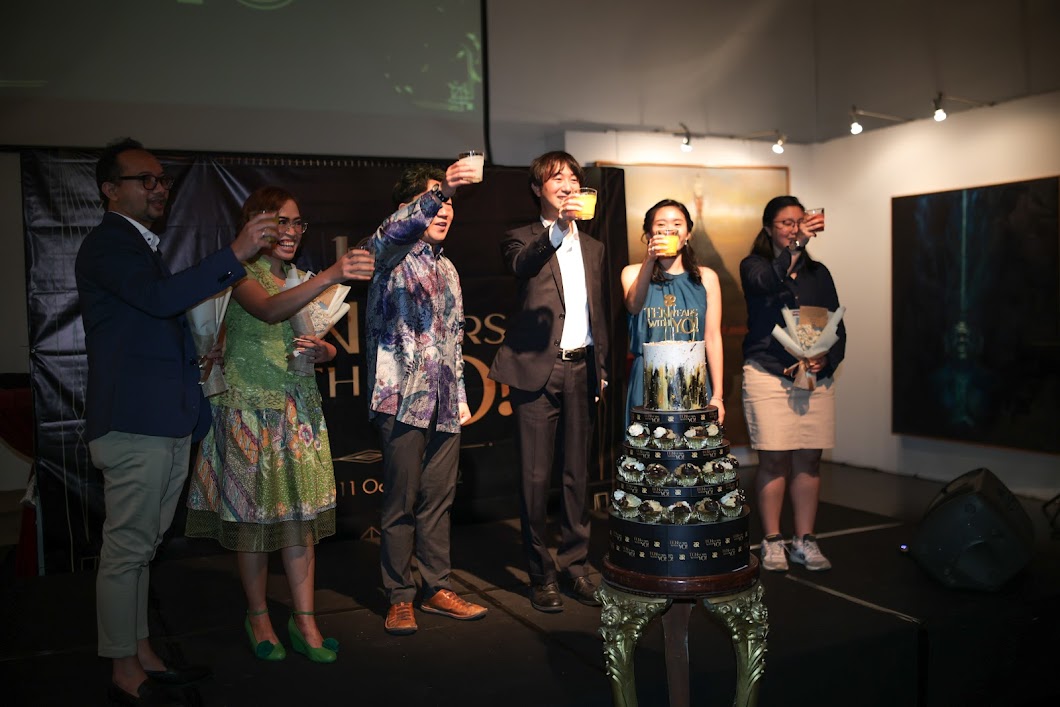 As the room was heating up after the toast, the crowd were surprised by special performances from our members! Our talented singers Ardi, Mpep, Aria and Maica were performing live. 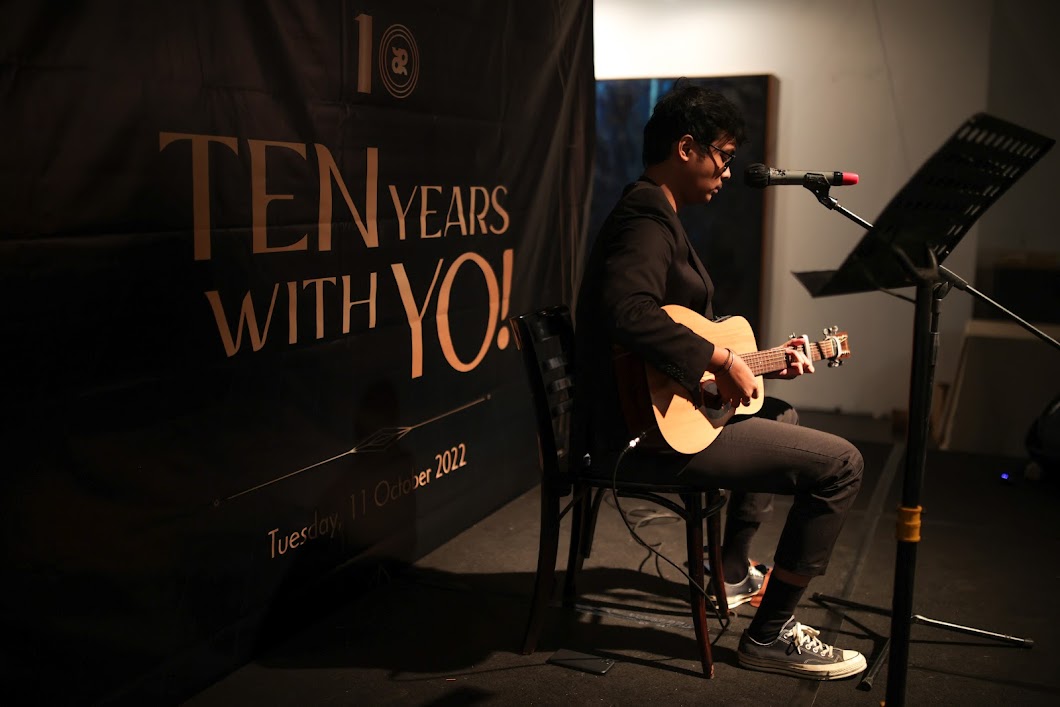 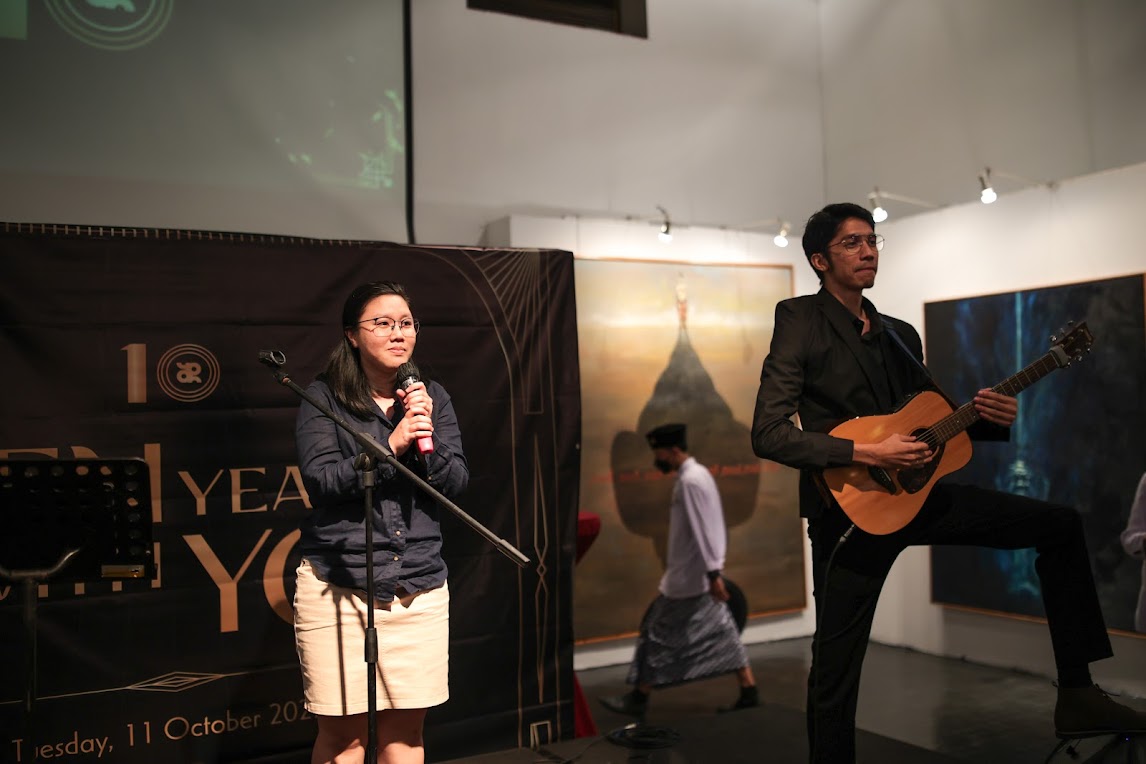 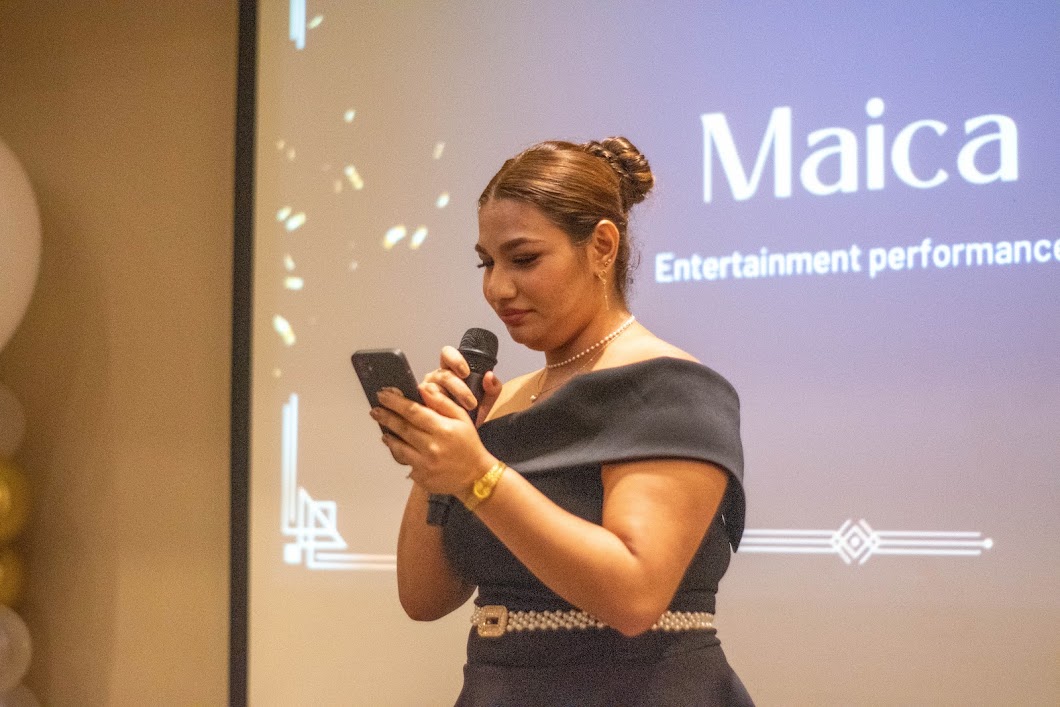 And the fun didn’t just stop there. In Jakarta, the venue organizer decided to also give us an anniversary surprise where they performed a traditional dance when they presented the main course menu.

Then they invited Kyon and Mr. Kato danced along with them and soon after that Seto, Peter and Wisnu were dancing along with the groove. As you can see in the photo below, it turns out that they are all professional dancers!

Back to our event in the Manila, Kara and Jamie were the game master of the night. Although our members were dressed up in suits and dresses, that did not limit them to go all out to win the game. Go team Philippines!

After dinner was served and after all that fun, then finally came the award and recognition section. There were a total of 4 awards presented : MVA Q3, Always Present Award, Helping Hand Award, and Office Sunshine Award.

As an appreciation and recognition for the member’s effort of dressing up for the event, the Philippines office presented Best Dress Awards to Jamie and Luke!

At last but not least, all of the members were going home with a special anniversary gift box and on top of that, most of them were lucky enough to win the raffles!

And not to forget, group photo time!

Ten years is only the beginning. So long as we’re together, the best is yet to come.

Let’s have more great parties together!

Secret of WFH Based On A Three-Year Remote Work Experience

Looks like we are going to be in WFH longer than we all plan...

18 Things I Bought During Quarantine

Who else gets a mini-heart jump when a package arrives for y...

4 Productivity Tools You Can Maximize While Working From Home

Finding it hard to focus on work while at home? Still findin...